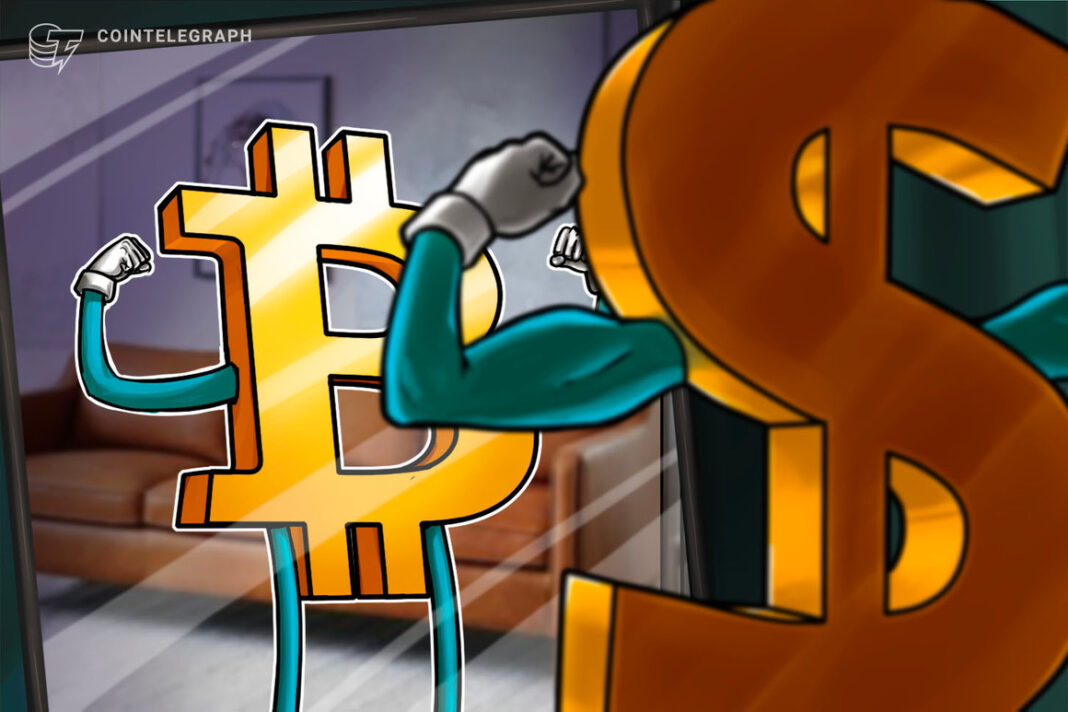 Bitcoin (BTC) made a fresh bid to crack $40,000 on April 28 as Wall Street trading opened to twenty-year highs for U.S. dollar strength.

Traders had predicted what they saw as a relief bounce, with the implication that the subsequent rejection would spark continuation of the downtrend.

On the day, caution was advised.

“BTC Currently consolidating in this falling wedge. In case of a breakout I’d be targetting $42K. It’s good to wait for confirmation first if you decide to take the trade imo,” popular Twitter account Daan Crypto Trades argued.

“Only a strong break and reclaim of $40.6k would make me look at higher targets,” fellow trader Crypto Ed added.

“Charts: mostly pointing lower. Liquidity: a squeeze to the upside to hunt the shorts.”

With limited movement on Bitcoin itself, however, attention was fully focused on the dollar, which continued to outdo itself as the U.S. dollar currency index (DXY) hit its highest levels since 2002.

“The parabolic rally by DXY does not bode well for risk-on assets like stocks and Bitcoin. Until the rally cools off, playing defense is the way to go,” commentator Benjamin Cowen warned.

Others agreed that DXY was now “parabolic,” while trading guru Blockchain Backer saw similarities between the dollar’s current setup versus other currencies and the period immediately after the March 2020 COVID-19 cross-asset crash.

Started peeking at other currencies, and was looking at the Euro vs USD (EURUSD). And realized… I’ve seen this before. This was how the bottom looked in the crypto market before the big reversal happened after C-19. pic.twitter.com/M8uxBYZXX0

A reversal of trajectory for USD should give Bitcoin some relief, the theory goes, with Cointelegraph contributor Michaël van de Poppe forecasting it to do “really well” in such circumstances.

The rampant USD was meanwhile sparking concerns about knock-on effects for other economies.

Related: Ex-BitMEX CEO explains how Bitcoin will have hit $1 million by 2030

Should instability enter the picture, volatility may return to haunt risk assets already at the mercy of central bank anti-inflation policy. Ironically, the spark might be Japan, where the central bank continues to print money.

“If capital flows back into Japan & it retraces to the support line, it’s a rug pull on funds allocated to rest of the globe. If continues to dive it pressures the PBOC to let the Yuan also fall. Neither of these options is good…”

The Japanese yen also traded at twenty-year lows on the day.

“What do Keynesian investors do in a crisis? They rush into the $ thinking it is safety,” Alasdair Macleod, head of research for precious metals trading firm Goldmoney, added.

“Nearly all investors and money managers have been brainwashed into thinking this way since the Nixon shock. This morning JPY slide accelerates.”

Macleod saw what he called a “major currency crisis” coming, engulfing the dollar’s strength “next” as it followed the fate of the yen, euro and pound sterling.