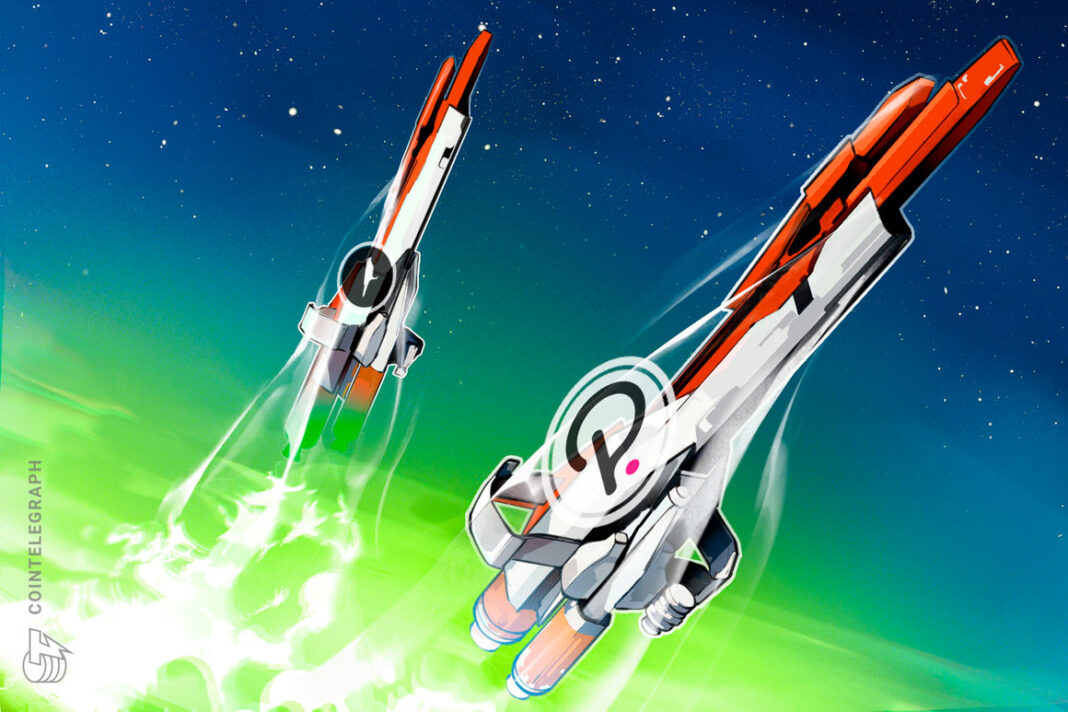 Polkadot (DOT) and Kusama (KSM) rose in tandem on June 3 as traders assessed a venture capital firm’s major investment into their blockchain ecosystems.

Dubbed as Master Ventures, an Asian blockchain incubator and venture capitalist announced that it had launched a $30 million venture capital fund called Master Ventures Polkadot VC Fund. In a press release published Wednesday, the firm said that its fund would “support and finance the Parachain bids” of tier-1 blockchain projects that want to win a Parachain slot on the Polkadot Relay Chain.

Master Ventures also noted that its proceeds would also assist early-stage projects in launching atop the Polkadot and Kusama ecosystems.

Traders took the announcement as their cue to raise their bids on DOT and KSM pairs. Their sudden interest allowed the DOT/USD exchange rate to rise by up to 27.91% to $29.21 from its Wednesday opening rate. Meanwhile, Kusama’s KSM/USD climbed 39.35% to $511.91 in the same period.

The wild moves uphill accompanied bullish outlooks across the social media, with widely-followed analysts predicting upside continuation in both the Polkadot and Kusama spot markets.

$KSM What a monster. Hold the level it just flipped and there’s no reason this shouldn’t keep going. https://t.co/WEztyGwg9c pic.twitter.com/lCzTNqeZIr

At the root of bullish analogies lied a promise that Master Venture’s $30 million investment into the Polkadot ecosystem would lead to a speedier auctioning of its “Parachain slots.” In retrospect, a Parachain is equivalent to a blockchain (layer 1) tied to one particular functionality, with its own specialized characteristics and governance structure.

For example, one can bid for the Polkadot Parachain slot to, say, build a decentralized oracle network atop it. As a result, the outcome would be an application-, users-, and liquidity-specific unique blockchain that would be able to query data from other Parachains, with Polkadot acting as a layer 0 solution — a node — that enables communications between its undertaken blockchains.

Meanwhile, Kusama is an experimental version of Polkadot but exists as an independent blockchain network. It functions as a sandbox for developers that want to test pre-release versions of their projects before deploying them on Polkadot’s mainnet.

Potential demand for DOT and KSM

Developers bidding for Parachain slots on Polkadot and Kusama would need to use the projects’ native assets, DOT and KSM, respectively.

Master Ventures’ $30M fund intends to support and finance these developers and their tier-1 projects. That means the venture capital firm would need to purchase DOT and KSM tokens to back the Parachain auction’s bids. In turn, Polkadot and Kusama would lock the tokens for as long as the developers want to run their project on their parachains — ranging from six months to two years.

If the Polkadot ecosystem succeeds, it would mean an always-increasing amount of DOT and KSM tokens locked for the duration of the parachain slot. As a result, their total supply in circulation would deplete. That may somewhat explain why traders have suddenly turned bullish on DOT and KSM.

Mira Christanto, a researcher at crypto data analytics firm Messari, wrote in one of her posts from May that 65% of DOT supply has been staked. Meanwhile, 30% of DOT remains in circulation. Therefore, the upcoming Parachain auction would take more Polkadot tokens out of circulation. Christanto added:

“After the parachain launch, 40% of DOT could be bonded in parachains, hence reducing effective circulating supply to only 15%.”

Conversely, a lower turnout for Polkadot and Kusama’s Parachain auctions could leave DOT and KSM with a lower-than-expected demand, risking spot price corrections.

Following massive BTC purchase announcement, MicroStrategy says it may sell up to $1B in stock