A dayslong sell-off in the Bitcoin market intensified, and Treasury yields jumped Thursday, as Federal Reserve Chairman Jerome Powell did little in subsiding fears about the recent spike in government debt selling.

At the Wall Street Journal Jobs Summit, Mr. Powell reiterated that the US economy is far from achieving maximum employment. He spoke about keeping interest rates at near-zer0 levels but fell short of discussing whether or not the central bank would buy more long-term Treasurys every month to contain rising yields, which some economists said was possible.

“As it relates to the bond market, I’d be concerned by disorderly conditions in markets or by a persistent tightening in financial conditions broadly that threatens the achievement of our goals,” Mr. Powell said.

Wall Street, Bitcoin All Down

Bitcoin turned lower after Mr. Powell’s comments, with its downside sentiment accelerating by US afternoon. The benchmark cryptocurrency slipped 3.97 percent to $47,543 on Thursday and followed it with further declines during the early Asia-Pacific session on Friday. At its intraday low, the bitcoin-to-dollar exchange attracted bids worth $46,219.

Elsewhere in the cryptocurrency market, almost all the top tokens recorded major intraday losses on a 24-hour adjusted timeframe. Chainlink, Polkadot, and Binance Coin fell within the 9-11 percent range, while Ethereum—the second-largest cryptocurrency—dropped by approximately 6 percent. 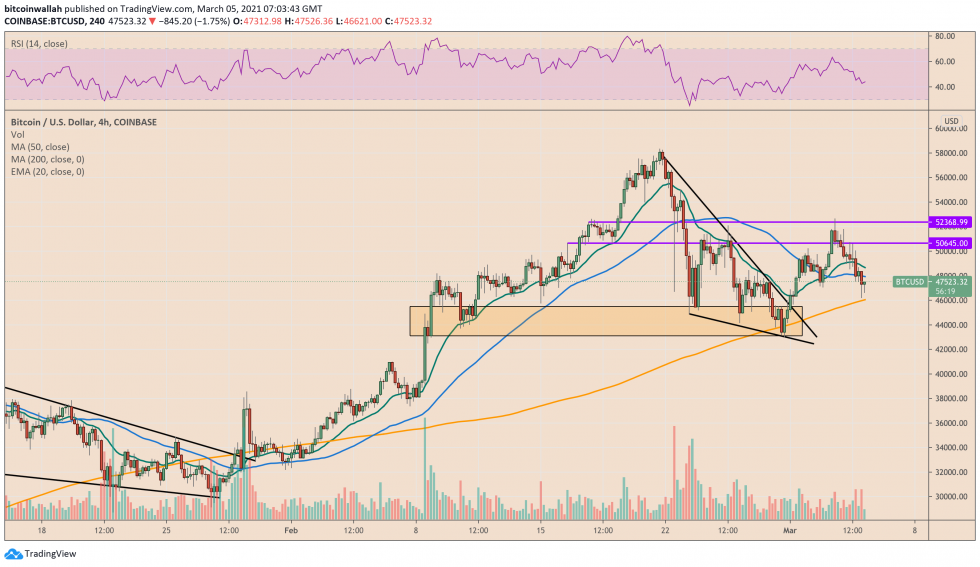 Money instead flew into assets that performed poorly during the coronavirus pandemic last year. That included the S&P 500’s energy sector, which gained 2.5 percent. The US dollar also rose higher. Bitcoin tends to react negatively when the greenback gains strength.

Eric Winograd, a senior economist at AllianceBernstein, said that he expects the Fed to intervene if the yields on longer-dated Treasuries surge above certain thresholds. He anticipated the interest rate returns on bonds to grow higher in coming quarters but slowly.

On-chain indicators continued to point at growing Bitcoin accumulation sentiment. In his latest tweets, CryptoQuant CEO Ki-Young Ju flashed about 12,000 bitcoin flowing out of Coinbase exchange to wallets associated with its over-the-counter desks.

Mr. Ju also said that most institutions that bought Bitcoin during its price uptrend had not sold their holdings yet. He presented screenshots of Coinbase Custody wallets that showed large batches of bitcoins sitting idle in old addresses since their first deposits.

“Remember, institutions like Tesla are with us,” the on-chain analyst added.

Some analysts noted that Bitcoin risks falling towards $45,000 in the coming session but would retain its upside bias against long-term inflation fears.