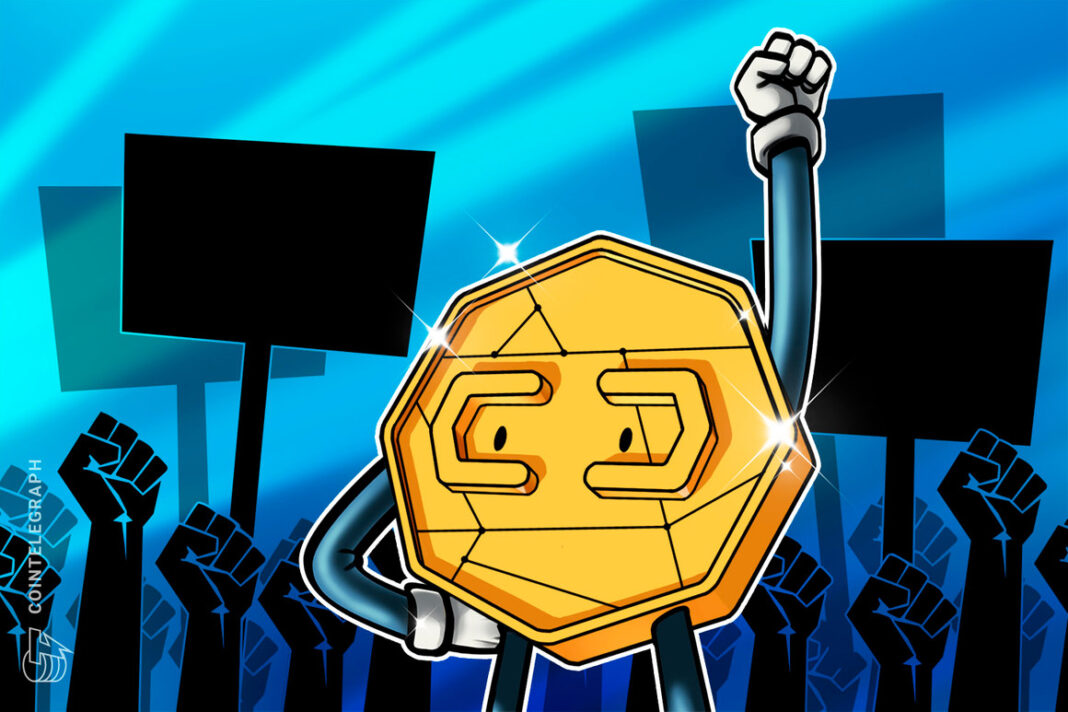 Russian political opposition leader Alexey Navalny is the latest subject to be tackled by the burgeoning non-fungible token art world. An animation inspired by the recently-arrested Kremlin critic was minted into an NFT and released on the SuperRare platform on Jan. 21.

The 1/1 artwork, simply called “Navalny,” is the first piece that pseudonymous artist @brickspacer111 has minted on the platform.

The 3D rendered piece starts with a close up of Navalny’s hand making the “V for Victory” sign. As the camera pulls back we see that he stands in front of a huge bust of Russian President Vladimir Putin.

The view continues to widen, showing that Navalny stands on top of a pile of books and filing cabinets, holding the scales of justice, while police with riot gear and truncheons try to reach him and blue and red flashing lights illuminate the scene.

The names of Putin’s alleged inner circle then flash onto the bust’s cheeks, while allusions to the reported “aqua disco” at the palace allegedly being built for the Russian president appear on its forehead.

Navalny recently returned to Russia from Germany, where he had been recovering from an assassination attempt. Investigators discovered that the pro-Bitcoin politician had been poisoned with a nerve agent, Novichok, while touring Siberia in August 2020.

The Russian authorities arrested him as he arrived at the airport for violating the probation terms of a previous embezzlement charge, which Navalny says is politically motivated.

Following his arrest, Navalny was tried in a closed hearing at a police station in Moscow, a practice which he criticized in a video as highly irregular and flouting the laws of the Russian Federation.

Since being arrested, Navalny’s team has released a documentary film containing allegations about a so-called “Putin’s Palace.” The film claims that this $1 billion palace complex being built on the Black Sea coast belongs to Putin and has been paid for “with the largest bribe in history.”

The film received over 20 million views in the first day of its release on YouTube.

Subtitled with Navalny’s quote: “You should fear nothing except your own fear”, the “Navalny” NFT is open to offers from 0.5 Ether (ETH).