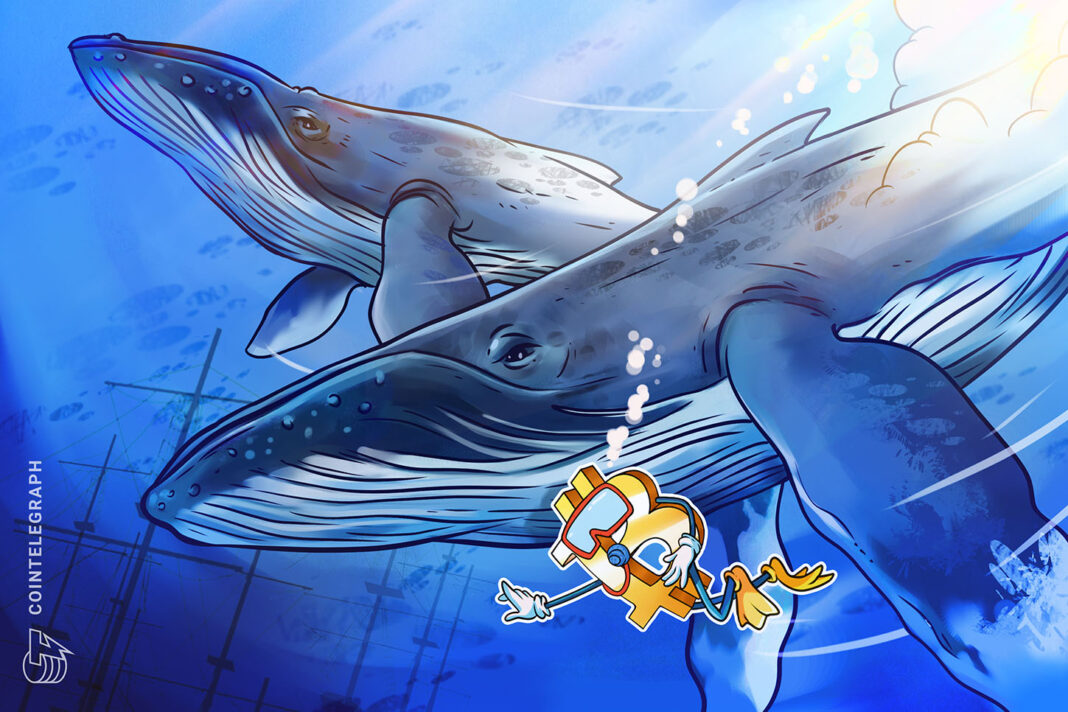 The price of Bitcoin (BTC) achieved a new all-time high above $42,000 on Jan. 8, surging by 9% in merely three hours. At the time, there was a high premium on Coinbase, which meant U.S. buyers drove up the market by aggressively accumulating BTC. But, there is continuous selling pressure coming from Asia, particularly from South Korea.

Bitcoin corrected sharply after rising to $42,000, declining by over 7% in about eight hours. The sell-off coincided with significant whale activity across major exchanges. Trading activity in the altcoin futures market also demonstrated a similar trend. For instance, on Jan. 9, a whale unloaded a big portion of Ether (ETH) longs on Bitfinex, taking profit for the first time since March 12.

Whales have been selling en masse since the start of 2021. As an example, when Bitcoin first surpassed $40,000, large whales began to sell BTC even as the price fell below $40,000. Within three hours, on Jan. 7, so-called “mega whales” on Binance sold off a total of four times, driving extreme volatility.

Where is Bitcoin headed next?

Currently, the Bitcoin market is essentially seeing a battle between whales taking profit on their positions and new buyers in the U.S. market accumulating BTC. As such, there has been consistent extreme volatility ever since Bitcoin surpassed $30,000. Due to the high inflow of capital into Bitcoin through Coinbase, the upside momentum of BTC would likely be sustained in the foreseeable future.

The key metrics to observe are Bitcoin outflows from Coinbase and stablecoin inflows into major exchanges. When high-net-worth investors purchase Bitcoin, they prefer to move the BTC out of centralized exchanges for security purposes. Hence, high Coinbase outflows would mean a heavy accumulation of BTC in the United States.

When stablecoin inflows are high, it suggests that sidelined capital is moving back into the Bitcoin market. Rather than cashing out to fiat currencies, such as the U.S. dollar, traders within the cryptocurrency exchange market, particularly derivatives traders, park their funds in stablecoins. Therefore, if capital stored in stablecoins begins to move back into cryptocurrencies, it typically suggests a bullish market structure.

Generally, the market sentiment around Bitcoin remains positive despite an upsurge throughout the past three months. Eric Wall, chief investment officer of Arcane Research, said in a tweet that Bitcoin has the potential to see a “very extreme peak” this time around. This would mean that even if Bitcoin could be overheated based on technical indicators in the near term, BTC could still have room for additional growth.

At the current price of around $40,000, the market capitalization of Bitcoin is valued at over $740 billion. Given gold’s valuation of $9 trillion, this would put BTC’s market cap at around 8.2% of gold. Bullish projections of Bitcoin, like the thesis of the Winklevoss twins, anticipate Bitcoin to overtake gold over the long term. Based on this assessment, some analysts say that Bitcoin reaching 10%–20% of gold’s market cap is realistic.

Wall noted that Bitcoin would likely peak when there is ostensibly a lot of “froth” in the market. If there is an unnaturally high level of retail excitement around Bitcoin, the probability of a temporary Bitcoin top would increase. However, Wall said that given the unprecedented level of institutional interest in Bitcoin, the next top could be much higher than many imagine:

“The reason is because our current macroeconomic climate is unprecedented — our economy is being flooded with money. On top of that, we’ve just witnessed an unbelievable level of endorsement from the financial elite in favor of Bitcoin. And we know this time that the price is being driven both by institutions and retail at the same time now.”

What are the key technical levels to watch?

According to researchers at Whalemap, a data analytics platform that tracks Bitcoin whales or high-net-worth investors, there are two key technical levels for Bitcoin in the near term. As long as BTC remains above $38,719 and $38,700, which are two major whale cluster areas, the researchers said that the bull trend of BTC remains intact.

Whale clusters form when whales accumulate Bitcoin at a certain price point and do not move their holdings afterward. Clusters are theoretically ideal support areas because whales would look to accumulate more at levels they previously bought BTC at if the price of Bitcoin dips. The researchers noted: “Support at $39,719, invalidation below $38,700. Gap in supports between $39,719 and $32,180 so consolidating in the bear zone could bring us down to $32k.”

On Jan. 9, Bitcoin’s price fell to as low as $38,700, recovering strongly at the support level. This indicates that some whales are accumulating at this level, protecting it as a short-term support area to keep the BTC rally moving.

However, Raoul Pal, CEO of Real Vision Group, warned of the “New Year Head Fake.” Pal said that hedge funds begin to talk about various risk-on assets at the beginning of the year. Then, when many investors buy in, the market tends to correct by the end of the first quarter. If this head fake phenomenon coincides with a rising U.S. dollar, Pal said that he would be tempted to place S&P 500 puts. In the options market, puts are short contracts that allow investors to bet against an asset or an index.

Considering that Bitcoin and gold tend to move together, and a rising dollar could negatively affect both assets, a New Year head fake could cause corrections in both the Bitcoin and the gold markets. Whether this correction would be as brutal as the March crash remains uncertain, but given that BTC is overbought on higher time frames, like the weekly and monthly charts, the possibility of a deep correction exists nonetheless.